According to Carolyn April, senior director of industry analysis at CompTIA, increasing diversity is one of the 10 trends to watch in the IT industry in 2021.

As reported in the IT Industry Outlook 2021 report, it’s time for companies to move beyond awareness of increasing diversity to public accountability on deliverables.

We know there have been 100s of initiatives and yet progress in many parts of the IT industry is painfully and embarrassingly slow.

One of the reasons that I’m writing a white paper (to be published March 2021) is to explore what is working and what is not to increase diversity in the IT sector.

Is it time for a new approach?

Will your organisation be setting public goals for diversity? And if not, why not?

Please get in touch if you’d like to discuss your 2021 diversity plans.

I love to keep one foot in employment so that I have a real and lived understanding of the challenges faced by your best female talent.

Back in March, I started a part-time fixed term contract at Macmillan Cancer Support. I joined the Volunteering L&D team to work on a project to design and develop digital induction training for their amazing volunteers.

Less than two weeks later the whole nation went into lockdown and Macmillan was faced with the challenge of converting their face to face emotional support volunteering to a remote offer, almost overnight.

I worked with the very lovely Kathryn Palmer-Skillings and colleagues across the charity to create new learning content, repurpose training materials and create a new digital learning programme for Macmillan’s Telephone Buddy Scheme that was ready to be used within a week.

It wasn’t the project I expected to be working on … but oh my goodness what an incredible experience.

I was part of an amazing team and we all worked really hard. As a result our volunteers were able to support more than 2,000 people living with cancer, in part because of the learning that we created.

Just imagine our delight this week when we heard we’d been shortlisted for the Learning & Performance Institute Learning Awards in the Digital Learning Transformation of the Year.

So exciting … now the long wait until February to find out the winner.

It makes good business sense to offer as much support as you can to employees going through redundancy, including offering outplacement support.

But it’s also important to support the staff who are not leaving. They are likely to be feeling a mixture of upset, guilt, relief, anger and grief.

Outplacement support helps the staff being made redundant as well as those who are staying:

A good outplacement plan will help staff to:

When I run outplacement workshops for organisations we explore:

What’s most rewarding is watching the group work together to support and lift each other. For example, often we don’t recognise our own strengths. Sometimes we take a talent for granted because it feels so easy.

When you run an outplacement workshop, individuals get constructive feedback from peers and former co-workers and this can be a huge boost to morale and confidence.

What outplacement support do you offer staff going through redundancy?

According to the Office of National Statistics, in the UK, women account for just 17% of workers in the tech sector.

This drops even more when you look at specific roles e.g. the proportion of women working as system designers and IT business analysts is 14% and only women make up only 13% of programmers and software developers.

During the Brexit debate, many argued that the UK’s growing reputation as a viable technology leader would help to safeguard the nation’s economy in the event of a no-deal exit from the EU.

Last year the UK tech sector experienced a record-breaking 12 months from the perspective of investment.

And the government announced that around 1.2 million new technical and digitally skilled workers will need to be hired by 2022 to support the huge growth of this sector.

Yet … the percentage of women in tech roles remains low, for a whole range of reasons.

And that’s before we even get started on discussing the gender pay gap.

What are you doing in your organisation to attract and retain women in technology roles?

Here are some ideas that other organisations include in their strategy:

I’d love to hear from you as to what’s worked successfully in your organisation. And also what hasn’t.

Get in touch by email today for an exploratory call to discuss how your organisation can:

If your current mantra is New Year, New Career, you’ll love my series of Career Conversations starting on Monday 6 January 2020.

When you’re job hunting or thinking about getting started with the job search, it’s really helpful to hear the real stories and challenges that other women dealt with.

It’s good to know you’re not the only one with fears, worries and doubts.

It’s even better to know that you CAN deal with those challenges.

My Career Conversations series is a sample of what to expect when you join the Career Club online membership community.

p.s. who else do you know who’s job hunting or thinking about it? please do share the news about my live 2020 Career Conversations

Never let go of your dreams.

On Saturday 16 November 2019 I was elected as NCT President. It’s a role I’ve been thinking about and dreaming about for many years.

It finally came true. It wasn’t a straight line from “Yes I want this role” to “Yes I have this role“. There have been many twists and turns. I first ran in 2015 and was unsuccessful that year.

However I truly believed I could be a good President. And I absolutely believe in this charity and what we do.

My husband has joked for years that I’m NCT to my bones.

Which goes to prove that when you really want something, keep going.

Brush yourself down and pick yourself up when things don’t go the way you want the first, second or third time ….

Take on board the learnings then try, try, and try again.

The LinkedIn Kickstart is for you if you want to

You’ll get 12 modules – each with a short video and a worksheet with a bite-sized task (plus a ‘when you’ve got more time‘ extension task too).

You’ll get invited to a private Facebook group where you can share your thoughts, ask questions, get feedback and be inspired.

In the meantime I’ll add you to The Confidence Guide which is published weekly, jam-packed with tips and tricks for ambitious women who want clarity and confidence. And we’ll talk again when we get started.

Click <<HERE>> if you want to get noticed on LinkedIn today!

If you know already that you want more personalised help than I can offer in a group programme, or you want to get started right away, a one-to-one personalised LinkedIn Profile review could be what you’re looking for. 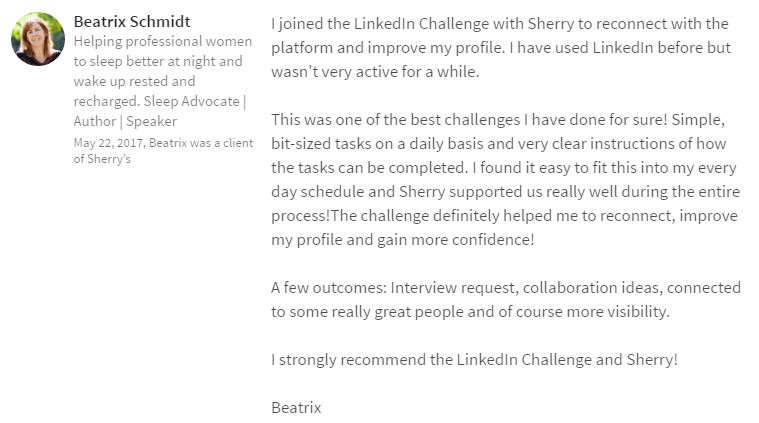 Ready to get started?  Join the priority list today so you don’t miss a thing when the next live round starts.

I can’t wait to share my knowledge and insights with you and hopefully you’ll learn to love LinkedIn as much as I do. Loved the final article that appeared in City AM on Friday 10 February.

Taking a proper break is essential – for your health and for your business performance.

It’s not about how long and how often you are in the office. It’s about the quality of the work that you do when you are there.

You might also be interested in the video blog that I recorded with Dr Christian Jessen and Geoff Rolls on the same topic of taking a break.